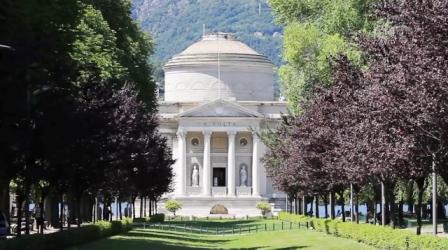 The route starts from Tempio Voltiano (Volta Temple). This is a neoclassical style structure, donated to the city by Francesco Somaini to the design of architect Federico Frigerio, and opened in 1928. It was intended to be the new venue to host the original scientific instruments of Volta, as well as reconstruction exhibits for those that the fire of 1899 destroyed during the Great Volta Exhibition. This was staged in Como on the centenary of the invention of the first battery. The ground floor displays much precious equipment, machines and tools of Volta’s lifetime. The upper loggia introduces the visitor to Volta the person, the citizen of Como, his family and his ties with the city, the public offices he held and the honours that were bestowed upon him.
In the town center there is Piazza Volta named after the monument to the scientist, opened in 1838 and designed by Pompeo Marchesi.
Volta was baptised in the church of San Donnino, in Via Diaz, where a plaque commemorates the event and it was in the same church that the physicist’s funeral was held.
Via Volta 62 is the house where Volta was born on February 18, 1745 and in which he died on March 5, 1827. The house had been purchased in 1536 by Zanino Volta and then owned by Carlo Pizzala in 1862, who had it restored to give it the appearance it has today.
Not far away is Torre Gattoni (Gattoni tower) which was acquired in late eighteenth century by Canon Giulio Cesare Gattoni. He set up a physics lab here in 1783 where Alessandro Volta often went to study and carry out experiments.
Opposite Porta Torre in Via Cesare Cantù is Liceo Classico Alessandro Volta. It used to be the location of the Real Ginnasium school of Como, where Volta taught from 1774 to 1778. In 1865 the school was named after him.
The itinerary can take in a visit to the Faro Voltiano (lighthouse) in Brunate, built in 1927 on the occasion of the celebrations for the centenary of the death of Alessandro Volta, as well as the Tomba di Volta (tomb of Volta) in Camnago Volta, a small neoclassic style temple built in 1831 and decorated with statues and relief work. The structure also contains a fine Carrara marble bust carved by Giovan Battista Comolli.