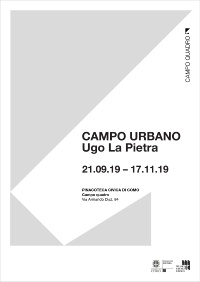 On 21st September 1969, something exceptional happened in Como: the streets and squares of the city were invaded by the exhibition-event ‘CAMPO URBANO, interventi estetici nella dimensione collettiva urbana’ (‘Campo Urbano: Aesthetic Interventions in a Collective Urban Dimension’). The event was born of the need to bring the artist into direct contact with the community of an urban centre, with the spaces in which they live every day, with their habits and needs, giving the artist the possibility to express him- or herself fully and thus with greater productive potential. This was not the typical commission of a pre-determined product, but rather an invitation to engage in the search for a real, living relationship which would not be taken for granted by the artists, the city’s inhabitants, or the city itself. This consequently led to placing the artists in front of fundamental questions that deal with the very meaning of art and the issue of its function, such as that regarding the limits of their ability to respond to the needs of the community; the choices appropriate to a non-marginal or merely decorative presence in society; and the opportunity to adopt ephemeral or permanent, radical or partial, subversive or reformist solutions.

To celebrate the 50th anniversary of this historic event, the Pinacoteca civica (Como art museum), in collaboration with the Cultural Association Art Company and the Galleria Ca’ di Fra' in Milan, will be exhibiting a new work specially created within the framework of StreetScape8 by one of the stars of Campo Urbano, Ugo La Pietra, in the Campo Quadro area. The installation consists of two photomontages that compare the artist’s intervention in the pedestrian area of Como on the occasion of the 1969 exhibition with his analysis of the pedestrian area of Milan, via Paolo Sarpi, used today for loading and unloading wholesale market goods. The comparison is also presented with works that allude to urban living with the title ‘Abitare è essere ovunque a casa propria’ (‘Living is being at home everywhere’).
The work will be visible in the Campo Quadro area from 21st September to 17th November

On the occasion of the Giornata del Contemporaneo (Contemporary Art Day), scheduled for 12th October, a meeting and storytelling event will be held in the Pinacoteca Hall of Honour at 5 pm with some of the stars of Campo Urbano: Ugo La Pietra, Gianni Pettena, and Giuliano Collina.
Participation in the event will be free.
Also on 12th October is the launch of the eighth edition of StreetScape, an event conceived and promoted by the cultural association ArtCompany in collaboration with the Municipality of Como, which, perpetuating the legacy of Campo Urbano, intends to reflect this year on new opportunities for interaction between contemporary art and the urban fabric of the city.

Street Scape is developed as a public exhibition spread throughout the squares and courtyards of the city, which this year will see the participation of Ugo La Pietra, Gianni Pettena, Christian Balzano, Michele Giangrande, and Francesco Garbelli.